I Am Not Your Perfect Mexican Daughter by Erika L. Sanchez 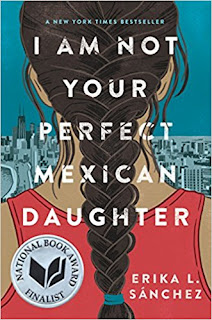 I Am Not Your Perfect Mexican Daughter was a National Book Award Finalist and has been on basically every list for Best of the Year books.  It is one that I have read nothing but great things about.  I really enjoyed it.

This is the story of Julia, the daughter of Mexican immigrants now living in Chicago.  Julia is not the perfect Mexican daughter.  She does not want to just stay at home and be with her family.  She doesn't care about learning to cook or even make tortillas.  When she graduates from high school she wants to go to college, not stick around and take care of her parents.  She is not the perfect daughter, but her older sister Olga was.

Olga was just what her mother wanted her to be until a tragic accident claimed her life.  Now as her death as so heavily impacted her family, Julia starts to learn that maybe her sister wasn't as perfect as everyone thought.  And as Julia learns more about who her sister was , she really begins to learn who she is.

The Absolutely True Diary of a Part-Time Indian meets Jane the Virgin in this poignant but often laugh-out-loud funny contemporary YA about losing a sister and finding yourself amid the pressures, expectations, and stereotypes of growing up in a Mexican-American home.

But Julia is not your perfect Mexican daughter. That was Olga’s role.

Then a tragic accident on the busiest street in Chicago leaves Olga dead and Julia left behind to reassemble the shattered pieces of her family. And no one seems to acknowledge that Julia is broken, too. Instead, her mother seems to channel her grief into pointing out every possible way Julia has failed.

But it’s not long before Julia discovers that Olga might not have been as perfect as everyone thought. With the help of her best friend Lorena, and her first kiss, first love, first everything boyfriend Connor, Julia is determined to find out. Was Olga really what she seemed? Or was there more to her sister’s story? And either way, how can Julia even attempt to live up to a seemingly impossible ideal?
Posted by Joe Godina at 1:49 PM No comments: 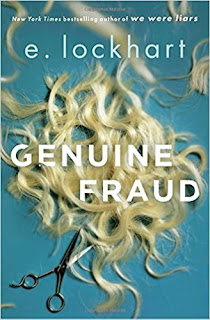 Genuine Fraud by E. Lockhart was a really fun book.  I loved Lockhart's last book, We Were Liars, so I was really looking forward to reading this one.  It didn't disappoint.

This story was told in a really interesting way, in reverse order.  It starts with Chapter 18 and then works backwards down to Chapter 1.   As the story begins, the reader meets Jule and Imogen and we have an idea of who these girls are.  But as the story line works its way backward, the mystery of who they really are unfolds in a beautiful way.

If you are a fan of E. Lockhart, this one will definitely satisfy you as a reader.

From the author of We Were Liars, which John Green called "utterly unforgettable," comes a unique novel that showcases E. Lockhart’s unmatched ability to play with style and deliver a perfectly plotted, well-written novel with a surprise twist.

Be among the first to meet Imogen and Jule!

Imogen is a runaway heiress, an orphan, a cook, and a cheat.
Jule is a fighter, a social chameleon, and an athlete.
An intense friendship. A disappearance. A murder, or maybe two.
A bad romance, or maybe three.
Blunt objects, disguises, blood, and chocolate. The American dream, superheroes, spies, and villains.
A girl who refuses to give people what they want from her.
A girl who refuses to be the person she once was.

"You will devour it." —Gayle Forman, bestselling author of If I Stay
“Fans of E. Lockhart’s We Were Liars will love this . . . and definitely won’t see the ending coming.”  —HelloGiggles.com

“Tangled secrets, diabolical lies and, ultimately, a mind-blowing outcome are crafted with the plotted precision we expect (and love!) from E. Lockhart.” —Justine Magazine

“As with E. Lockhart's previous novel, the best-selling "We Were Liars," [readers] will likely finish the last page and flip right back to the beginning to search for clues they missed.” —Chicago Tribune
Posted by Joe Godina at 1:17 PM No comments:

The Apocalypse of Elena Mendoza by Shaun David Hutchinson 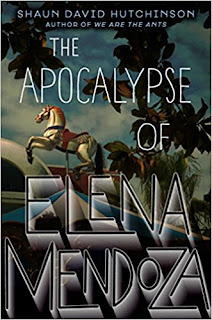 Wow!  What an incredible story.  Shaun David Hutchinson has given us another great novel with The Apocalypse of Elena Mendoza.  I am a huge fan of We Are the Ants (a previous novel of his) and this was just as enjoyable.

This novel tells the story of Elena Mendoza, a teenage girl who was born of a virgin mother (look it up, it's called parthenogenesis).  While her life has been pretty normal to this point, things are about to get much stranger.  When the girl that she has a crush on is shot in the stomach outside of Starbucks, the voices that she has heard all of her life tell her that she has the ability to heal this girl.  When she does just that, her life takes a major turn.

The voices tell her that through her ability to heal, she is the only one who can save humanity from the coming apocalypse.  But each time she heals someone, it comes with a cost to strangers all over the world.  What Elena has to figure out what her role in all of this is and if using her newfound ability is really for the benefit of all.

This is an intriguing story line that brings in the ideas of free will and choice and what role those choices play in not only our own lives, but the lives of those around us.  It deals with consequences and our understanding of what those consequences mean.  It tackles the questions that we face in our daily lives about how we are living and if we are truly making our planet a better place for all.  This is a book that is going to make you think.

This novel won't be released until February 6, 2018, so if you want to read it, let me know and I can get you mine.

From the critically acclaimed author of We Are the Ants and At the Edge of the Universe comes a mind-bending, riveting novel about a teen who was born to a virgin mother and realizes she has the power to heal—but that power comes at a huge cost.

Sixteen-year-old Elena Mendoza is the product of a virgin birth.

This can be scientifically explained (it’s called parthenogenesis), but what can’t be explained is how Elena is able to heal Freddie, the girl she’s had a crush on for years, from a gunshot wound in a Starbucks parking lot. Or why the boy who shot Freddie, David Combs, disappeared from the same parking lot minutes later after getting sucked up into the clouds. What also can’t be explained are the talking girl on the front of a tampon box, or the reasons that David Combs shot Freddie in the first place.

As more unbelievable things occur, and Elena continues to perform miracles, the only remaining explanation is the least logical of all—that the world is actually coming to an end, and Elena is possibly the only one who can do something about it.
Posted by Joe Godina at 6:47 AM No comments: 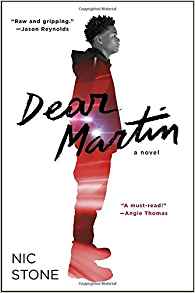 In Dear Martin, Nic Stone has given us a powerful story about our country's continuing struggle with racism.  Our main character, Justyce McAllister is a black teen who is working hard to succeed in life.  He is an elite Prep school, is near the top of this class, captain of the debate team, and he is headed to an Ivy League school after he graduates.

He has it all until the racism that has always been out starts to creep in to his own life.  He begins a project studying Dr. Martin Luther King and begins to write letters to him.  He is always asking the question, "What would Martin do?"  But as his experiences pile up he starts to wonder if maybe he wasn't asking the right question.

This powerful debut novel helps the reader to explore the issues of race in our country and maybe find ways to start the process of discussion and eventually healing.  This one is definitely well worth your time.

A must-read!” —Angie Thomas, #1 New York Times bestselling author of The Hate U Give

Justyce McAllister is top of his class and set for the Ivy League—but none of that matters to the police officer who just put him in handcuffs. And despite leaving his rough neighborhood behind, he can't escape the scorn of his former peers or the ridicule of his new classmates.

Justyce looks to the teachings of Dr. Martin Luther King Jr. for answers. But do they hold up anymore? He starts a journal to Dr. King to find out.

Then comes the day Justyce goes driving with his best friend, Manny, windows rolled down, music turned up—way up, sparking the fury of a white off-duty cop beside them. Words fly. Shots are fired. Justyce and Manny are caught in the crosshairs. In the media fallout, it's Justyce who is under attack.
Posted by Joe Godina at 10:36 AM No comments: