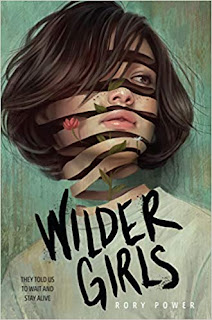 Wilder Girls by Rory Power was an intense and captivating story.  It will keep you on the edge of your seat as you cheer on Hetty and the other girls who have been trapped at their private school.  This is a book about friendship and the lengths you will go to save it.  It is a story about resilience, and power, and the fight you have when everything seems to be against you.  Wilder Girls is a unique story that will have you turning the page faster and faster as the story goes on.

"Celebrates the resilience of girls and the earthshaking power of their friendships. An eerie, unforgettable triumph." --Claire Legrand, New York Times bestselling author of Furyborn

"Wilder Girls is so sharp and packs so much emotion in such wise ways. I'm convinced we're about to witness the emergence of a major new literary star." --Jeff VanderMeer, New York Times bestselling author of Annihilation

A feminist Lord of the Flies about three best friends living in quarantine at their island boarding school, and the lengths they go to uncover the truth of their confinement when one disappears. This fresh, new debut is a mind-bending novel unlike anything you've read before.

It's been eighteen months since the Raxter School for Girls was put under quarantine. Since the Tox hit and pulled Hetty's life out from under her.

It started slow. First the teachers died one by one. Then it began to infect the students, turning their bodies strange and foreign. Now, cut off from the rest of the world and left to fend for themselves on their island home, the girls don't dare wander outside the school's fence, where the Tox has made the woods wild and dangerous. They wait for the cure they were promised as the Tox seeps into everything.

But when Byatt goes missing, Hetty will do anything to find her, even if it means breaking quarantine and braving the horrors that lie beyond the fence. And when she does, Hetty learns that there's more to their story, to their life at Raxter, than she could have ever thought true.
Posted by Joe Godina at 7:56 AM No comments:

Neanderthal Opens the Door to the Universe by Preston Norton 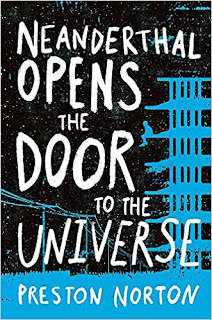 Neanderthal Opens the Door to the Universe by Preston Norton is an exceptional read.  It is such a fun and funny read, but also touching, emotional, and thought-provoking.  It is a story about figuring out your place in the world while trying to make it a better place.  It is about taking the risk to try and change the status quo, even when everything seems to be working against you.  I really can't say enough good things about this book.


Cliff Hubbard is a huge loser. Literally. His nickname at Happy Valley High School is Neanderthal because he's so enormous-6'6" and 250 pounds to be exact. He has nobody at school, and life in his trailer-park home has gone from bad to worse ever since his older brother's suicide.

There's no one Cliff hates more than the nauseatingly cool quarterback Aaron Zimmerman. Then Aaron returns to school after a near-death experience with a bizarre claim: while he was unconscious he saw God, who gave him a list of things to do to make Happy Valley High suck less. And God said there's only one person who can help: Neanderthal.

To his own surprise, Cliff says he's in. As he and Aaron make their way through the List, which involves a vindictive English teacher, a mysterious computer hacker, a decidedly unchristian cult of Jesus Teens, the local drug dealers, and the meanest bully at HVHS, Cliff feels like he's part of something for the first time since losing his brother. But fixing a broken school isn't as simple as it seems, and just when Cliff thinks they've completed the List, he realizes their mission hits closer to home than he ever imagined.

Razor sharp, moving, and outrageously funny, Neanderthal Opens the Door to the Universe is an unforgettable story of finding your place in an imperfect world.
Posted by Joe Godina at 9:18 AM No comments: