All Roads Lead to Lawrence by Craig Leener 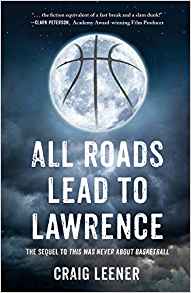 Craig Leener's novel All Roads Lead to Lawrence is the exciting sequel to his debut novel, This Was Never About Basketball.  And this story was just as fun and riveting as the first.  With all the references to KU, this was a great read as a Jayhawk fan.  Lawrence is a fast paced read about finding your place in the world while dealing with tragedy.  It is about resilience and our ability to survive when we think we may fall apart.

In this sequel to THIS WAS NEVER ABOUT BASKETBALL, a few months have passed since Zeke Archer saved basketball from extinction after the 7th Dimension—the otherworldly entity that brought the game to Earth in 1891—tried to take it away for good. Now Zeke is settling into life after high school, leading his team and running the point at Jefferson Community College. And there, on his home court, is where this strange tale begins . . . Tragedy strikes close to Zeke’s heart, and his world slowly begins to crumble around him. But when he receives a mysterious message that could only have originated from another realm, Zeke begins a journey like no other. Flanked by his trusted friend Lawrence—a math whiz who might have just discovered a top-secret inter-dimensional portal—Zeke crosses paths with a drop-kicking rugby aficionado, a sage and telepathic sea creature, and the possible inventor of basketball, all in the quest to find the true meaning of love, loss, and friendship, on and off the court.
Posted by Joe Godina at 7:58 AM No comments:

This Was Never About Basketball by Craig Leener 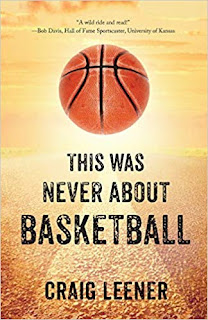 This Was Never About Basketball by Craig Leener was such a fun read.  As a KU fan, it was even better.  Having your favorite team play a role in a novel like this makes it even more enjoyable.   But even with out that element to the story, this one would have been a fantastic read.  And this book, like the title suggest, is not really about basketball.  That doesn't mean that the game doesn't play an important role, because it does.  But this story is about so much more than that.  It is a coming of age story about redemption, acceptance, family, and friendship.  It was such a fun ride.

This Was Never About Basketball is the story of Ezekiel Archer, a standout basketball player who is heading to the University of Kansas to continue his playing career after high school.  But when his temper gets the best of him during the city championship game, his scholarship to KU is taken away.  But even worse than that, the game of basketball is slowly being taken away from all of humanity by an otherworldly entity that first introduced the game to us over one hundred years ago.  Now Ezekiel must travel to the KU campus with his new sidekick, Lawrence, in order to try and save the game he loves so much.  With the inevitable bumps in the road, Zeke has a chance to learn from his past and find a path to redemption in his future.

In this coming-of-age novel, seventeen-year-old high school basketball star Ezekiel “Zeke” Archer has it all: a sweet jump shot, a full-ride scholarship to a Midwestern basketball powerhouse, and the brightest future. But when Zeke’s temper gets the better of him in the city championship, he is expelled from school, has to forfeit his scholarship, and is left to ponder his once-hopeful future.While finishing his final high school days in the California educational system’s version of purgatory, Zeke makes a stunning discovery. With the help of a young autistic classmate Zeke befriends, he learns that the mysterious 7th Dimension, which brought basketball to Earth more than a century ago, has decided to take the game away for good — all because of the ugly event Zeke set into motion in his final game!As he embarks on the ultimate cross-country road trip to save basketball, Zeke must confront his unsettled past — including a father he’s not heard from in years and a brother fighting in a war half a world away — in order to set his life on the right path and rescue the game he loves.
Posted by Joe Godina at 7:32 AM No comments: 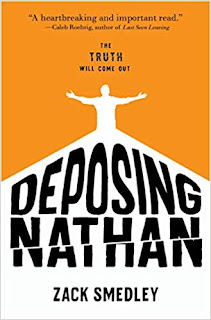 Deposing Nathan by Zack Smedley is such an intense and engaging novel.  It grabs your attention from the first pages and doesn't let go until Nate tells us his whole story.  This is a story that deals with so many important topics like identity, self-acceptance, friendship, family, and trauma.  Smedley has given us a unique story that will leave you gasping as the truth is finally revealed.

Nate has been stabbed.  Cam was arrested and charged with the crime.  But the story of these best friends and what led to the events is far from clear.  Now Nate must tell his story in a deposition for the case.  As he goes back to the beginning of his friendship with Cam, he gives us the details of their friendship, their love, and most often their arguments.  But in telling his story, Nate starts to come to grips with his reality and what it means to accept who he really is.


For sixteen years, Nate was the perfect son―the product of a no-nonsense upbringing and deep spiritual faith. Then he met Cam, who pushed him to break rules, dream, and accept himself. Conflicted, Nate began to push back. With each push, the boys became more entangled in each others' worlds...but they also spiraled closer to their breaking points. And now all of it has fallen apart after a fistfight-turned-near-fatal-incident―one that's left Nate with a stab wound and Cam in jail.

Now Nate is being ordered to give a statement, under oath, that will send his best friend to prison. The problem is, the real story of what happened between them isn't as simple as anyone thinks. With all eyes on him, Nate must make his confessions about what led up to that night with Cam...and in doing so, risk tearing both of their lives apart.
Posted by Joe Godina at 10:23 AM No comments: