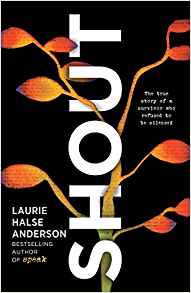 When I finished reading Laurie Halse Anderson's upcoming novel, SHOUT, I had so many things I wanted to say about it, but I didn't know how to say it.  I still don't.  This poetic memoir has left me speechless in the best way possible.

I first came to know Laurie's work through Twisted, an incredible novel that I have been using in my classroom for many years now.  It is a book that connects with all of my students.  But Laurie is most well known for her groundbreaking novel Speak.  20 years later, Speak is still resonating with people all over the world.  But when Anderson realized that not much has changed in how the world views the topics of rape, sexual assault, consent, etc., she decided to speak up again, but this time she decided to SHOUT!

This novel, told in her free verse, is Anderson's telling of the trials, tribulations, and pains she grew up with, culminating in her own rape before she ever reached high school.  Her story is raw emotion.  It is painfully beautiful in the words she shares with us.  This is her story, but it is also the story of so many unfortunate people who have suffered the same as her, but have always been afraid to sound their voice.  This is Anderson's call to action.  We can no longer continue to be silent.  We mush shout along side Laurie for all of those afraid that their voice won't be heard.

SHOUT is another title I was fortunate enough to get an ARC of.  It won't be released until March 12, so if you want to read this incredible story, let me know!

A searing poetic memoir and call to action from the bestselling and award-winning author of Speak, Laurie Halse Anderson!

Bestselling author Laurie Halse Anderson is known for the unflinching way she writes about, and advocates for, survivors of sexual assault. Now, inspired by her fans and enraged by how little in our culture has changed since her groundbreaking novel Speak was first published twenty years ago, she has written a poetry memoir that is as vulnerable as it is rallying, as timely as it is timeless. In free verse, Anderson shares reflections, rants, and calls to action woven between deeply personal stories from her life that she's never written about before. Searing and soul-searching, this important memoir is a denouncement of our society's failures and a love letter to all the people with the courage to say #MeToo and #TimesUp, whether aloud, online, or only in their own hearts. Shout speaks truth to power in a loud, clear voice-- and once you hear it, it is impossible to ignore.
Posted by Joe Godina at 6:44 AM No comments: 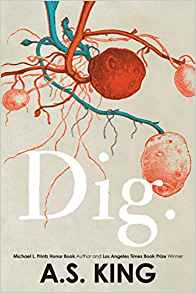 As any of you who have ever read this blog before know, I am a HUGE fan of anything written by A.S. King.  Amy is a master storyteller, and her latest novel, Dig, is no exception.  In her newest story, she tells the story of 5 teenagers who are all trying to find their place in the world, lost in a world which includes dying parents, no known past, and an abusive home, among other things.

As these teens all find their way in to each other's lives, they discover that they don't have to be defined by their parents, their grandparents, or any other outside influence.  Instead, they can decide to change the things that have always seemed inevitable.  All they have to do is dig!  If they can dig under the surface, they can find that, just like the potato, the best parts of us are what has yet to be seen.  We can bring the good stuff to the surface and make a whole new life for ourselves that has not yet been spoiled by the outside world.

Amy is incredible, and Dig is just further proof of that.  This one may be my new favorite of hers.  Unfortunately for most of you reading this, it won't be available until March 26.  I was lucky enough to snag an ARC at the ALAN Workshop, so if you want to read it just let me know and you can read my copy.

Acclaimed master of the YA novel A.S. King's eleventh book is a surreal and searing dive into the tangled secrets of a wealthy white family in suburban Pennsylvania and the terrible cost the family's children pay to maintain the family name.

The Shoveler, the Freak, CanIHelpYou?, Loretta the Flea-Circus Ring Mistress, and First-Class Malcolm. These are the five teenagers lost in the Hemmings family's maze of tangled secrets. Only a generation removed from being Pennsylvania potato farmers, Gottfried and Marla Hemmings managed to trade digging spuds for developing subdivisions and now sit atop a seven-figure bank account--wealth they've declined to pass on to their adult children or their teenage grandchildren. "Because we want them to thrive," Marla always says. What does thriving look like? Like carrying a snow shovel everywhere. Like selling pot at the Arby's drive-thru window. Like a first class ticket to Jamaica between cancer treatments. Like a flea-circus in a double-wide. Like the GPS coordinates to a mound of dirt in a New Jersey forest. As the rot just beneath the surface of the Hemmings' precious suburban respectability begins to spread, the far-flung grandchildren gradually find their ways back to one another, just in time to uncover the terrible cost of maintaining the family name.

With her inimitable surrealism and insight into teenage experience, A.S. King explores how a corrosive culture of polite, affluent white supremacy tears a family apart and how one determined generation can save themselves.
Posted by Joe Godina at 7:00 AM No comments: