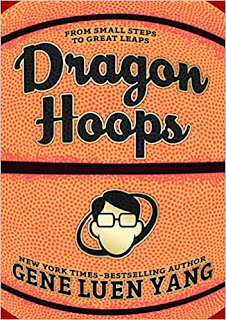 My latest read was Dragon Hoops, the newest graphic novel from Gene Luen Yang.  To say I was blown away by this story would be an understatement.  It is phenomenal!  As a sports fan in general, and specifically a basketball fan, I knew I would be a fan.  Seeing Gene develop his love for the game during the course of this novel was so fun to watch.  And as fun as this was to watch, the personal stories of the kids and coaches involved was even better.  Yang has given us not only the story of a special season for the Bishop O'Dowd Dragons, but he has given us numerous history lessons in the process.  He has shown us how so many of the people involved, both past and present, were incredibly brave as they took that first step in to the unknown.  This is an incredible story that spans generations to tell us the tale of one unforgettable season!  I cannot recommend this one highly enough!


In his latest graphic novel, Dragon Hoops, New York Times bestselling author Gene Luen Yang turns the spotlight on his life, his family, and the high school where he teaches.

But Gene doesn’t get sports. As a kid, his friends called him “Stick” and every basketball game he played ended in pain. He lost interest in basketball long ago, but at the high school where he now teaches, it's all anyone can talk about. The men’s varsity team, the Dragons, is having a phenomenal season that’s been decades in the making. Each victory brings them closer to their ultimate goal: the California State Championships.

Once Gene gets to know these young all-stars, he realizes that their story is just as thrilling as anything he’s seen on a comic book page. He knows he has to follow this epic to its end. What he doesn’t know yet is that this season is not only going to change the Dragons’s lives, but his own life as well.
Posted by Joe Godina at 3:34 PM No comments:

Let's Call It A Doomsday by Katie Henry 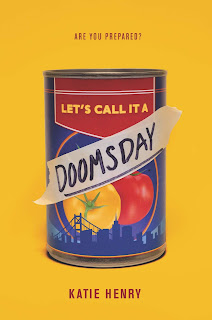 
An Amazon Best Book of the Month! An engrossing and thoughtful contemporary tale that tackles faith, friendship, family, anxiety, and the potential apocalypse from Katie Henry, the acclaimed author of Heretics Anonymous.

There are many ways the world could end. A fire. A catastrophic flood. A super eruption that spews lakes of lava. Ellis Kimball has made note of all possible scenarios, and she is prepared for each one.

What she doesn’t expect is meeting Hannah Marks in her therapist’s waiting room. Hannah calls their meeting fate. After all, Ellis is scared about the end of the world; Hannah knows when it’s going to happen.

Despite Ellis’s anxiety—about what others think of her, about what she’s doing wrong, about the safety of her loved ones—the two girls become friends. But time is ticking down, and as Ellis tries to help Hannah decipher the details of her doomsday premonition, their search for answers only raises more questions.

When does it happen? Who will believe them? And how do you prepare for the end of the world when it feels like your life is just getting started?
Posted by Joe Godina at 9:20 AM No comments:

Be Not Far From Me by Mindy McGinnis 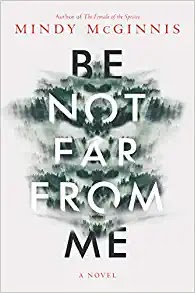 I am a huge fan of Mindy McGinnis and was really looking forward to reading her newest release, Be Not Far From Me.  This novel did not disappoint.  I really cannot say enough good things about this novel.  It is phenomenal!  It is such an incredible story about survival and self-reliance.  At the same time, it is a story about the importance of those people who play a role in our lives.  It is about understanding that each of us is trying to survive every day, whether that is lost in the woods or just trying to navigate our daily lives.

Be Not Far From Me is intense and gritty.  It will keep you turning the page as fast as you can while you hang of every move that Ashley makes as she tries to survive.  You will watch in wonder at the extremes she goes through in order to make it out alive.  And as a reader, you will be rooting hard for Ashley to not only survive, but to find her place in world that is often cruel and dangerous.


Hatchet meets Wild in this harrowing YA survival story about a teenage girl’s attempt to endure the impossible, from the Edgar Award-winning author of The Female of the Species, Mindy McGinnis.

The world is not tame. Ashley knows this truth deep in her bones, more at home with trees overhead than a roof.

So when she goes hiking in the Smokies with her friends for a night of partying, the falling dark and creaking trees are second nature to her. But people are not tame either. And when Ashley catches her boyfriend with another girl, drunken rage sends her running into the night, stopped only by a nasty fall into a ravine.

Morning brings the realization that she’s alone—and far off trail. Lost in undisturbed forest and with nothing but the clothes on her back, Ashley must figure out how to survive with the red streak of infection creeping up her leg.
Posted by Joe Godina at 6:34 AM No comments:

Daughters Unto Devils by Amy Lukavics 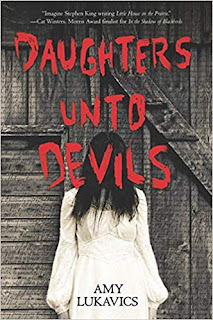 If you are looking for a fun and creepy horror story, Daughters Unto Devils by Amy Lukavics will do the trick.  I heard about this book as "Little House on the Prairie meets Stephen King" and it immediately caught my attention.  It didn't disappoint.  There are a handful of creepy scenes that will keep your skin crawling long after you have turned the page.  Lukavics has given the reader an intense page-turner that will surely keep them up at night.

When sixteen-year-old Amanda Verner’s family decides to move from their small mountain cabin to the vast prairie, she hopes it is her chance for a fresh start. She can leave behind the memory of the past winter; of her sickly Ma giving birth to a baby sister who cries endlessly; of the terrifying visions she saw as her sanity began to slip, the victim of cabin fever; and most of all, the memories of the boy she has been secretly meeting with as a distraction from her pain. The boy whose baby she now carries.

When the Verners arrive at their new home, a large cabin abandoned by its previous owners, they discover the inside covered in blood. And as the days pass, it is obvious to Amanda that something isn’t right on the prairie. She’s heard stories of lands being tainted by evil, of men losing their minds and killing their families, and there is something strange about the doctor and his son who live in the woods on the edge of the prairie. But with the guilt and shame of her sins weighing on her, Amanda can’t be sure if the true evil lies in the land, or deep within her soul.
Posted by Joe Godina at 10:25 AM No comments: