Diary of a Haunting by M. Verano 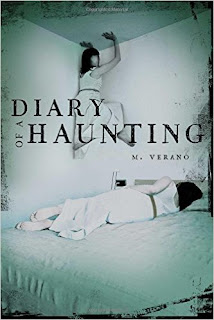 I was really excited to read this one.  I don't read a lot of horror, but I love a good ghost story.  The cover of this book really grabbed my attention.  I wish the rest of the novel would have done the same.  It wasn't the worst book I have ever read, but it wasn't what I was hoping for.  With the exception of the "Editor's Note" and the Afterword, it is told exclusively through the journal of Paige Blanton.  She has moved to a small town in Idaho, with her mom and little brother, after her parents got divorced.  The house they live in is very old and as we learn later has an interesting history.  Weird things happen in the house, like cell phones acting up and groceries disappearing, but nothing too frightening.  Sure, there were some scenes in the book that were a little creepy, but these had to do more with spiders and flies than anything supernatural.  If you are looking for a decent story about a weird house and it's history, give it a try.  If you are looking for a great ghost story, you may want to look elsewhere.

In the tradition of Paranormal Activity and The Blair Witch Project, an American teen recounts the strange events that occur after she moves into a new—and very haunted—home with her family in this chilling diary that features photos and images of what she experienced.

Letters, photographs, and a journal…all left behind in the harrowing aftermath.

Following her parents’ high-profile divorce, Paige and her brother are forced to move to Idaho with their mother, and Paige doesn’t have very high hopes for her new life. The small town they’ve moved to is nothing compared to the life she left behind in LA. And the situation is made even worse by the drafty old mansion they’ve rented that’s filled with spiders and plenty of other pests that Paige can’t even bear to imagine.

Pretty soon, strange things start to happen around the house—one can of ravioli becomes a dozen, unreadable words start appearing on the walls, and Paige’s little brother begins roaming the house late at night. And there’s something not right about the downstairs neighbor who seems to know a lot more than he’s letting on.

Things only get creepier when she learns about the cult that conducted experimental rituals in the house almost one hundred years earlier. The more Paige investigates, the clearer it all becomes: there’s something in the house, and whatever it is…and it won’t be backing down without a fight.
Posted by Joe Godina at 7:45 AM No comments: 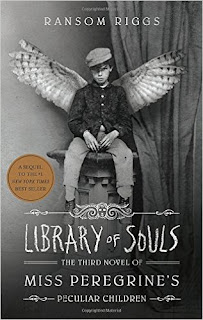 It took me a while, but I have finally finished the third and final book in the Miss Peregrine's series.  If you are a fan of the first two books, you will love this one just as much.  It is action packed, as Jacob and Emma try to save all of Peculiardom.  We finally see the full extent of Jacob's powers, but we also see all the power the wights are trying to harness in order to rule the world.  As in the previous books, the pictures play a wonderful part of this novel and Ransom Riggs is able to weave a wonderful tale while using the pictures in a stunning way.  This one will stick with you for a while.

Time is running out for the Peculiar Children. With a dangerous madman on the loose and their beloved Miss Peregrine still in danger, Jacob Portman and Emma Bloom are forced to stage the most daring of rescue missions. They’ll travel through a war-torn landscape, meet new allies, and face greater dangers than ever. . . . Will Jacob come into his own as the hero his fellow Peculiars know him to be? This action-packed adventure features more than 50 all-new Peculiar photographs.
Posted by Joe Godina at 7:42 AM No comments: