Who Killed Christopher Goodman?: Based on a True Crime Story by Allan Wolf 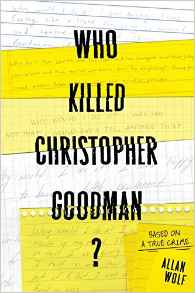 Here is the review I sent in for the ALAN Picks website.  This is a really quick read, told from six different viewpoints (including the killer), and one that I really enjoyed.


Christopher Goodman is a good kid.  Those that know him well, like him.  Those that have only crossed his path from time to time can recognize the good and kind nature he possesses.  As the summer is ending and school is about to start, the small town of Goldsburg, Virginia celebrates the annual Deadwood Days.  Christopher enjoys the day, hanging out with new friends and speaking with casual acquaintances.  Unfortunately for Christopher, at the end of the night, his kindness may have cost him his life.

Wolf gives us a fictionalized version of a true crime from his hometown, a crime that still resonates with him and many others to this day.  Who Killed Christopher Goodman? is told through the differing viewpoints of six different characters (including the 15 year old killer), all who had crossed the path of this special young man both in the days leading up to the festival and on the actual day of his murder.  Beginning weeks before his death, and ending weeks after, the six characters tell about their experiences with Christopher and discuss the grief and guilt they each felt afterwards, each trying to come to grips with it in their own personal way.

Inspired by a tragic true event in his past, Allan Wolf examines the circumstances of one boy’s inexplicable murder and the fateful summer leading up to it.

Everybody likes Chris Goodman. Sure, he’s a little odd. He wears those funny bell-bottoms and he really likes the word ennui and he shakes your hand when he meets you, but he’s also the kind of guy who’s always up for a good time, always happy to lend a hand. Everybody likes Chris Goodman, which makes it especially shocking when he’s murdered. Here, in a stunning multi-voiced narrative — including the perspective of the fifteen-year-old killer — and based on a true and terrible crime that occurred when he was in high school, author Allan Wolf sets out to answer the first question that comes to mind in moments of unthinkable tragedy: how could a thing like this happen?
Posted by Joe Godina at 7:02 AM No comments:

The Inexplicable Logic of My Life by Benjamin Alire Saenz 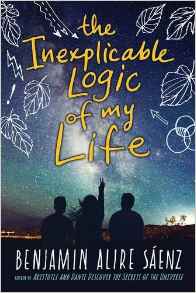 This book is beautiful!  I absolutely loved it.  In The Inexplicable Logic of my Life, Benjamin Alire Saenz, tells the story of Salvador Silva, a boy who is beginning his senior year of high school.  Salvador is still trying to find out who he is and where he fits in in the world.

This is a story of self discovery, faith, friendship, tragedy, and most importantly family.  It is a story about finding out and truly knowing where you belong.  I laughed, I cried, and best of all, I smiled throughout my reading of this wonderful and beautiful novel. Benjamin Alire Saenz again has given us a story that left me speechless immediately after and will stick with me for a long time to come.

Sal used to know his place with his adoptive gay father, their loving Mexican American family, and his best friend, Samantha. But it’s senior year, and suddenly Sal is throwing punches, questioning everything, and realizing he no longer knows himself. If Sal’s not who he thought he was, who is he?

This humor-infused, warmly humane look at universal questions of belonging is a triumph.
Posted by Joe Godina at 9:48 AM No comments:

The Female of the Species by Mindy McGinnis 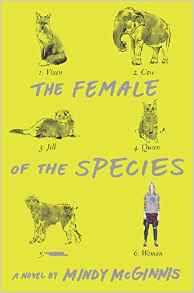 The Female of the Species was a pretty intense novel and I really enjoyed it.  Alex Craft is a high school girl whose sister was brutally murdered three years ago.  While the killer walked free from the law, he couldn't walk free from the dark passenger that lives inside of Alex.

Since that time, Alex has only kept to herself, her path in life taking her from home to school, then back home again.  That is until Peekay and Jack crack that hard exterior.  These two put her on a path that may lead her away from her darkness, but can she every really escape it?

As a reader we will face the question, "Is violence ever the answer to conflict?"  And through the strong and tough character of Alex Craft, we will have to really think about our answer.  It is  intense and tragic and heartbreaking, but it is a story worth telling.

Alex Craft knows how to kill someone. And she doesn’t feel bad about it.

Three years ago, when her older sister, Anna, was murdered and the killer walked free, Alex uncaged the language she knows best—the language of violence. While her own crime goes unpunished, Alex knows she can’t be trusted among other people. Not with Jack, the star athlete who wants to really know her but still feels guilty over the role he played the night Anna’s body was discovered. And not with Peekay, the preacher’s kid with a defiant streak who befriends Alex while they volunteer at an animal shelter. Not anyone.

As their senior year unfolds, Alex’s darker nature breaks out, setting these three teens on a collision course that will change their lives forever.
Posted by Joe Godina at 12:36 PM No comments: 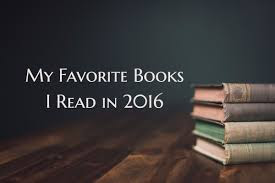 Putting together a top 10 list of my favorite reads from the past year has been a difficult task.  There were so many books I read this year that I thoroughly enjoyed, but I decided I needed to cut it down to a list of 10.  Putting them in any sort of order may have been the most difficult task of all.  Honestly, after #1, I'm not sure that the order would be the same if I did it tomorrow.  Most of the novels on this list were new in 2016, but a few are books that I just hadn't read before but I am glad I found them.   If you click on each title, it will take you to my post and full review of each.  Hopefully this list will help you find something you may have missed in the last year.  Enjoy!


1. Kids of Appetite by David Arnold
-I was just blown away by this book.  Arnold's follow up to the wonderful Mosquitoland did not disappoint!

2.  Still Life With Tornado by A.S. King
-A.S. King gave us another wonderful and powerful novel this year.  What a great read!

3.  We Are the Ants by Shaun David Hutchinson
-This was the first I had read of Hutchinson, and I couldn't get enough.  This is an amazing book.

4.  Last Night I Sang to the Monster by Benjamin Alire Saenz
-This one was not new in 2016, but I am so glad it was suggested to me.  I talked to Benjamin Alire Saenz about this book and he said writing it almost killed him.  I told him that reading it almost did the same to me.  A really powerful book that will stick with you for a long time afterward.

5.  Me and Marvin Gardens by Amy Sarig King
-Another book by A.S. King?  Of course!  This book doesn't actually come out for a couple more weeks, but I read it in 2016, so it makes my list.  And when a book makes you smile as much as this one did for me, it has to be included!

6.  This is Where it Ends by Marieke Nijamp
-A book about a very difficult subject, a school shooting, but a book that is powerful and a book that is needed.

7.  The Memory of Things  by Gae Polisner
-With our teenagers now having basically no memory (some weren't even born yet) of 9/11, this book is important to give voice to a teenager at the time and help our kids have a better understanding of what it was like for someone like them.

8.  The Crossover/Booked by Kwame Alexander
-This is kind of cheating to put two books in to one slot on the list, but I had to keep these two together.  Both are told in verse and are just beautiful stories.

10. My Sister Rosa by Justine Larbalestier
-Such a fun and chilling read!  I was terrified of that little girl and muttered several four letter words as this story came to a close.  #10 seems way too low for this book.
Posted by Joe Godina at 12:08 PM 3 comments: