Exile From Eden by Andrew Smith 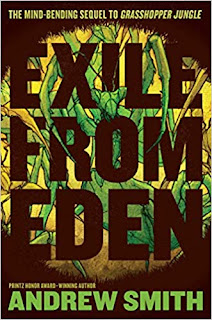 As any of you who have ever read this blog know, I am a HUGE fan of Andrew Smith and everything he writes.  I loved his novel Grasshopper Jungle and have even worked it in to my Senior English class.  I was VERY fortunate that Andrew was kind enough to send me a copy of the sequel, Exile From Eden.  I had been anticipating this book for so long (its release date is September 24), and it was incredible to finally have it my hands.  After finishing last night, it surpassed any and all expectations I may have had for it.  It is simply incredible.

Unlike most sequels, Exile does not take place immediately after the conclusion of Grasshopper Jungle.  Instead, it is 16 years after the terrifying ending of the previous story.  Arek Szczerba has lived the entirety of his 16 years inside the hole of Eden, safe from the giant bugs that have destroyed the world.  When Austin and Robby leave on one of their runs and don't return, Arek is ready to leave the safety of Eden and construct his own world outside of the hole while searching for his missing fathers.  Along for the adventure is Mel, Robby's little sister, and the love of Arek's life.  As these two search for Austin and Robby, they start to discover what the world was like before the tragedy, and maybe decide that it was a world fraught with many flaws.  But this story is told in a dual narrative, also telling the story of Breakfast (a very wild boy) and Olive.  Two friends who are also trying to navigate a new world in search of other survivors, all while trying to maintain their wildness.

This story is fun and funny, heartwarming and sad, all at the same time.  It's a look into the world we are living in and what kind of place we are leaving behind for all the future generations to come.  It is a story about discovery, both of our world and of ourselves.  And maybe most importantly, it is about finding a home while not caring about houses.

All he has are mysterious letters from Breakfast, a naked, wild boy traveling the countryside with his silent companion, Olive. Together, Arek and his best friend Mel, who stowed away in his van, navigate their way through the ravaged remains of the outside world.

This long-awaited sequel to the irreverent, groundbreaking Printz Honor Book Grasshopper Jungle is stunning, compelling, and even more hilarious and beautifully bizarre than its predecessor.
Posted by Joe Godina at 7:57 AM No comments:

We'll Fly Away by Bryan Bliss 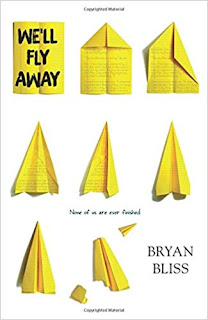 We'll Fly Away by Bryan Bliss was an emotional and devastating read, but also a story that will make you think about love and friendship and what you will do for those that mean the most to you.

This hard hitting book flips back and forth between the senior year of Luke and Toby, the two main characters, and letters written by Luke while he sits on death row.  It will keep you flipping the pages as you start to unravel the story of these two boys, boys who have been as close as brothers since they were young.  And as they try and survive their final year of school before being able to escape their small town, the reader will see how decisions have an impact on all of those that are closest to you.  In the end, this story ask us about redemption and whether or not everyone is cable of it.  I know this is one novel that I will be thinking about for a long time.

“[Bliss dares] his readers not only to see the depths of human complexity, but to care.”—Booklist (starred review)

Luke and Toby have always had each other’s backs. But then one choice—or maybe it is a series of choices—sets them down an irrevocable path. We’ll Fly Away weaves together Luke and Toby’s senior year of high school with letters Luke writes to Toby later—from death row.

Best friends since childhood, Luke and Toby have dreamed of one thing: getting out of their dead-end town. Soon they finally will, riding the tails of Luke’s wrestling scholarship, never looking back. If they don’t drift apart first. If Toby’s abusive dad, or Luke’s unreliable mom, or anything else their complicated lives throw at them doesn’t get in the way.

Tense and emotional, this hard-hitting novel explores family abuse, sex, love, and friendship, and how far people will go to protect those they love. For fans of Jason Reynolds, Marieke Nijkamp, and NPR’s Serial podcast. 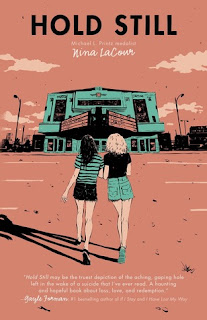 Hold Still by Nina LaCour, was the debut novel for this Printz Award winning author.  After 10 years, it got a new cover and was rereleased.  This book was beautiful and heartbreaking and full of hope.  It is a novel that will make you feel the pain that the main character, Caitlin, so often feels since she lost her best friend to suicide.  You will long for the healing that she so desperately needs and find hope in the friendships the she struggles to cultivate.  Nina LaCour has given us a novel that intimately details that pain that many feel as a result of suicide and the resilience that comes with finding a way through that pain.  This novel will stick with you long after you have finished the last beautiful words.

A beautiful new edition of the stunning debut novel by Nina LaCour, award-winning author of We Are Okay

“Hold Still may be the truest depiction of the aching, gaping hole left in the wake of a suicide that I’ve ever read. A haunting and hopeful book about loss, love, and redemption.” – Gayle Forman, #1 bestselling author of If I Stay and I Have Lost My Way

That night Ingrid told Caitlin, I’ll go wherever you go. But by dawn Ingrid, and her promise, were gone.

Ingrid’s suicide immobilizes Caitlin, leaving her unsure of her place in a new life she hardly recognizes. A life without the art, the laughter, the music, and the joy that she shared with her best friend.... But Ingrid left something behind. In words and drawings, Ingrid documented a painful farewell in her journal. Journeying through Ingrid’s final days, Caitlin fights back through unspeakable loss to find renewed hope.

Hold Still is the indelible debut that launched Nina LaCour, the award-winning author of We Are Okay. LaCour’s breakthrough novel brings the changing seasons of Caitlin’s first year without Ingrid to the page with indelible emotion and honesty.

Includes an all-new essay from the author to commemorate 10 years in print!
Posted by Joe Godina at 11:16 AM No comments: