Because of the Sun by Jenny Torres Sanchez 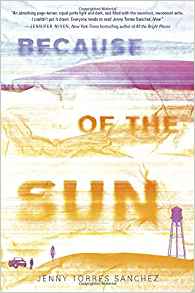 Dani is a young girl who has to deal with the brutal death of her mother at the hands (or paws) of a bear. Her mother was not always, or even very often, a decent mother. When an aunt who she never even knew existed agrees to take her in, she has to learn to deal with the past that continues to haunt her, and the bear that continues to chase her. With the help of her aunt and a new love interest, she comes to understand the past while accepting her future.

“An absorbing page-turner, equal parts light and dark, and filled with the sweetest, swooniest ache. Everyone needs to read Jenny Torres Sanchez. Now.” —JENNIFER NIVEN, New York Times bestselling author of All the Bright Places and Holding Up the Universe

From the backyards of suburban Florida to the parched desert of New Mexico, Because of the Sun explores the complexity of family, the saving grace of friendship, and the healing that can begin when the truth is brought to light.

Dani learned to tolerate her existence in suburban Florida with her brash and seemingly unloving mother by embracing the philosophy Why care? It will only hurt. So when her mother is killed in a sudden and violent manner, Dani goes into an even deeper protection mode: total numbness. It’s the only way she can go on.

But when Dani chooses The Stranger by Albert Camus as summer reading for school, it feels like fate. The main character’s alienation after his mother’s death mirrors her own.

Dani’s life is thrown into further turmoil when she is sent to New Mexico to live with an aunt she never knew she had. The awkwardness between them is palpable. To escape, Dani takes long walks in the merciless heat. One day, she meets Paulo, who understands how much Dani is hurting. Although she is hesitant at first, a mutual trust and affection develops between them. And as she and her aunt begin to connect, Dani learns about her mother’s past. Forgiving isn’t easy, but maybe it’s the only way to move forward.
Posted by Joe Godina at 5:13 PM No comments: