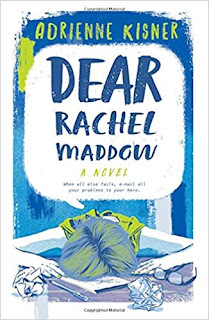 Once again I had the privilege of reviewing a book for ALAN Picks.  I was given the book Dear Rachel Maddow by Adrienne Kisner.  This was a quick and enjoyable read.  What follows is the review I submitted for ALAN Picks:

Brynn Harper is a former honor student who has struggled since the drug overdose death of her older brother Nick.  With the tumbling of her grades and her self-worth, she has been moved from honors courses to the applied classes in the basement of her high school.  Because of an assignment in one of her new classes, she writes and email to MSNBC host Rachel Maddow.  When she surprisingly gets a reply back, Brynn begins to write a series of unsent emails to her new found hero.  She tells Rachel about her brother, her unhappy home life, her ex-girlfriend, and all the other trials and tribulations in her life.

When the school decides to let a student be a part of the selection committee for the new superintendent, the usual suspect, Adam Graff, steps up to take the position.  But Adam is part of the honors program and Brynn knows that he will only serve the needs of those select students.  Who will be the advocate for students like Brynn and all the others that fall between the two extremes?  Though hesitantly, Brynn steps up to the plate and takes on the task of representing the whole student body, not just the honors students, in the selection of their new leader.  Throughout her journey of civic involvement, she continues to tell her story to Rachel Maddow, all along using her as a measuring stick for what is the right thing to do.

In her debut novel, Adrienne Kisner tells Brynn’s story in the epistolary format.  And while the voice of the novel is mainly that of our protagonist, Kisner does well in developing the other characters that play a significant role in Brynn’s life.  Kisner makes the reader want to stand up and fight for the rights of all.  And in a world that doesn’t always think along these lines, Adrienne Kisner’s Dear Rachel Maddow is an inspiring breath of fresh air.


In Adrienne Kisner's Dear Rachel Maddow, a high school girl deals with school politics and life after her brother’s death by drafting emails to MSNBC host Rachel Maddow in this funny and heartfelt YA debut.

She watches her daily, and after writing to Rachel for a school project--and actually getting a response--Brynn starts drafting e-mails to Rachel but never sending them. Brynn tells Rachel about breaking up with her first serious girlfriend, about her brother Nick's death, about her passive mother and even worse stepfather, about how she's stuck in remedial courses at school and is considering dropping out.

Then Brynn is confronted with a moral dilemma. One student representative will be allowed to have a voice among the administration in the selection of a new school superintendent. Brynn's archnemesis, Adam, and ex-girlfriend, Sarah, believe only Honors students are worthy of the selection committee seat. Brynn feels all students deserve a voice. When she runs for the position, the knives are out. So she begins to ask herself: What Would Rachel Maddow Do?
Posted by Joe Godina at 8:23 AM No comments:

The Cheerleaders by Kara Thomas 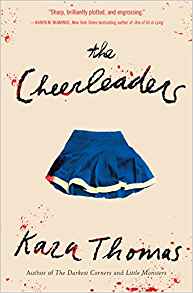 If a book is written by Kara Thomas, I'm going to read it!  I have been waiting an awfully long time for The Cheerleaders and it was definitely worth the wait.  Again, Thomas has given us a story that will keep us guessing to the very end.  Thomas is a master of spinning a dark tale of murder and deceit and making the reader continue to turn the pages in anticipation of what comes next.  I can't wait to see what comes next!

In The Cheerleaders, Monica is a teen girl that is still dealing with the suicide of her older sister, along with the deaths of four of her sister's cheerleading teammates, all coming within a month of each other.  As the five year anniversary closes in, Monica starts to question what has always been the accepted story.  As she continues to dive deeper into exactly what happened to her sister and her friends, the story becomes darker and more mysterious as we start to question who was really responsible.  Just like her previous novels, this one is a highly engaging and enjoyable read!

"Sharp, brilliantly plotted, and totally engrossing."--KAREN M. MCMANUS, New York Times bestselling author of One of Us Is Lying

From the author of The Darkest Corners and Little Monsters comes an all-new edge-of-your-seat thriller set in upstate New York about an eerie sequence of seemingly unrelated events that leaves five cheerleaders dead.

There are no more cheerleaders in the town of Sunnybrook.

First there was the car accident--two girls dead after hitting a tree on a rainy night. Not long after, the murders happened. Those two girls were killed by the man next door. The police shot him, so no one will ever know his reasons. Monica's sister was the last cheerleader to die. After her suicide, Sunnybrook High disbanded the cheer squad. No one wanted to be reminded of the girls they'd lost.

That was five years ago. Now the faculty and students at Sunnybrook High want to remember the lost cheerleaders. But for Monica, it's not that easy. She just wants to forget.

Only, Monica's world is starting to unravel. There are the letters in her stepdad's desk, an unearthed, years-old cell phone, a strange new friend at school. . . . Whatever happened five years ago isn't over. Some people in town know more than they're saying. And somehow, Monica is at the center of it all.

There are no more cheerleaders in Sunnybrook, but that doesn't mean anyone else is safe.
Posted by Joe Godina at 12:11 PM No comments: 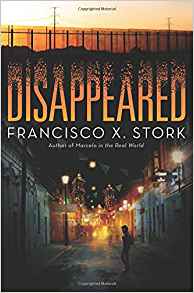 Disappeared by Francisco X. Stork is a wonderful and timely novel.  This is a novel that deals with the disappearances of girls throughout Mexico, but hits on the increasing spread of sex trafficking throughout the world, including here in the United States.  But it is also a novel about making the best choices for yourself and your loved ones.  It isn't just about the right choices, but about making the choices that are right.  This story is told in alternating view points, going between Sara, a young newspaper reporter, and Emiliano, her younger brother.  It is a quick and highly engaging read.

Disappeared tells the story of Sara, a young reporter at the newspaper in Juarez.  She has been outspoken about the disappearance of local girls, especially since her best friend Linda has gone missing at the hands of the cartel.  But when a threat to the lives of Sara and her family comes in to the newspaper's offices, she is forced to make a choice: Stop talking about the missing girls and give up on the hope of ever finding Linda or keep investigating and risk putting everyone she loves in danger.

Emiliano is a star soccer player and a budding entrepreneur.  Since his father left for the United States, Emiliano has worked to help his struggling family pay the bills.  He is given the opportunity to increase the profits from his business and make his family's life easier, but isn't exactly legal.  Emiliano has to decide if the benefits of this new partnership and worth giving up the moral integrity he has worked so hard to develop.

This is a novel that will grab you quickly and take you on a ride you won't soon forget!

Four Months Ago Sara Zapata's best friend disappeared, kidnapped by the web of criminals who terrorize Juarez.Four Hours Ago Sara received a death threat -- and with it, a clue to the place where her friend is locked away.Four Weeks Ago Emiliano Zapata fell in love with Perla Rubi, who will never be his so long as he's poor.Four Minutes Ago Emiliano got the chance to make more money than he ever dreamed -- just by joining the web. In the next four days, Sara and Emiliano will each face impossible choices, between life and justice, friends and family, truth and love. But when the web closes in on Sara, only one path remains for the siblings: the way across the desert to the United States
Posted by Joe Godina at 12:00 PM No comments:

Blood Water Paint by Joy McCullough is an extremely powerful novel that is told in a unique way.  It is the story of Artemisia Gentileschi, a talented painter of the 1600s, told both in verse and in prose.  This novel tells the real life story of Artemisia and her bravery and courage in the face of a society who finds little value in women, especially a woman who is just 17 years old.

When her mom died, Artemisia Gentileschi was faced with the choice of becoming a nun or helping her father with his aspiring career as a painter.  She chose to paint and became one of the greatest painters in all of Rome.  Her father took all the credit for her paintings and she was just a shadow in the background.  But when she is raped by a man who was brought in to help her painting, she is given another choice.  She can remain silent or she can speak out against her attacker.  But in a society where women have no real voice, is it worth the punishment she will face if she is thought to be lying?  In this astounding book, McCullough and Artemisia help to remind us, and women especially, to use your voice and never be afraid to "paint the blood."

"When I finished this novel, I knew I would be haunted and empowered by Artemisia Gentileschi's story for the rest of my life."—Amanda Lovelace, bestselling author of the princess saves herself in this one

Her mother died when she was twelve, and suddenly Artemisia Gentileschi had a stark choice: a life as a nun in a convent or a life grinding pigment for her father's paint.

By the time she was seventeen, Artemisia did more than grind pigment. She was one of Rome's most talented painters, even if no one knew her name. But Rome in 1610 was a city where men took what they wanted from women, and in the aftermath of rape Artemisia faced another terrible choice: a life of silence or a life of truth, no matter the cost.

He will not consume
my every thought.
I am a painter.
I will paint.

Joy McCullough's bold novel in verse is a portrait of an artist as a young woman, filled with the soaring highs of creative inspiration and the devastating setbacks of a system built to break her. McCullough weaves Artemisia's heartbreaking story with the stories of the ancient heroines, Susanna and Judith, who become not only the subjects of two of Artemisia's most famous paintings but sources of strength as she battles to paint a woman's timeless truth in the face of unspeakable and all-too-familiar violence.

I will show you
what a woman can do.