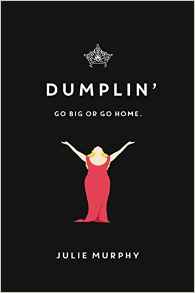 My beautiful wife was gracious enough to be a guest writer on the blog after she finished reading Dumplin' by Julie Murphy.  Here are her thoughts on this novel I have heard so many good things about:

Being a teenager is hard all on its own.  But if you are overweight and the daughter of a former beauty queen/present beauty pageant director, forget about it!  In Dumplin' we see Willowdean come to realize that the person you are on the inside is what makes us lovable.  Along with a motley crew of misfits, Willowdean shows us some relationships cannot be outgrown and no matter how big or small or pretty or not, we all deserve the chance to compete.  If you know what it feels like to not be good enough, this is the book for you.


For fans of John Green and Rainbow Rowell comes this powerful novel with the most fearless heroine—self-proclaimed fat girl Willowdean Dickson—from Julie Murphy, the acclaimed author of Side Effects May Vary. With starry Texas nights, red candy suckers, Dolly Parton songs, and a wildly unforgettable heroine—Dumplin’ is guaranteed to steal your heart.

Dubbed “Dumplin’” by her former beauty queen mom, Willowdean has always been at home in her own skin. Her thoughts on having the ultimate bikini body? Put a bikini on your body. With her all-American-beauty best friend, Ellen, by her side, things have always worked . . .  until Will takes a job at Harpy’s, the local fast-food joint. There she meets Private School Bo, a hot former jock. Will isn’t surprised to find herself attracted to Bo. But she is surprised when he seems to like her back.

Instead of finding new heights of self-assurance in her relationship with Bo, Will starts to doubt herself. So she sets out to take back her confidence by doing the most horrifying thing she can imagine: entering the Miss Teen Blue Bonnet Pageant—along with several other unlikely candidates—to show the world that she deserves to be up there as much as any twiggy girl does. Along the way, she’ll shock the hell out of Clover City—and maybe herself most of all.
Posted by Joe Godina at 7:23 AM No comments: 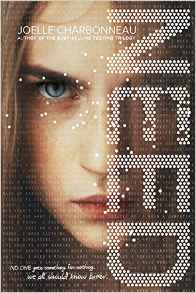 This one was fun, but in a creepy, scary, could this really happen type of way.  It deals with a new social network called NEED, that is only for students of the local high school.  It offers complete anonymity and highly discourages any discussion of the site.  In return, the users can request anything they need.  All they have to do is perform whatever task NEED ask of them, and they will receive what they ask for.  Simple enough right?  The tasks start off innocent enough: invite 7 new people to the site.  Soon, these tasks become more sinister and with that, the bodies start piling up.  I enjoyed it, but to be honest, it kind of scared me by the possible reality of it all.

Here is the book trailer: Need


“No one gets something for nothing. We all should know better.”


Teenagers at Wisconsin’s Nottawa High School are drawn deeper into a social networking site that promises to grant their every need . . . regardless of the consequences. Soon the site turns sinister, with simple pranks escalating to malicious crimes. The body count rises. In this chilling YA thriller, the author of the best-selling Testing trilogy examines not only the dark side of social media, but the dark side of human nature.
Posted by Joe Godina at 7:53 AM No comments:

This is Where it Ends by Marieke Nijamp 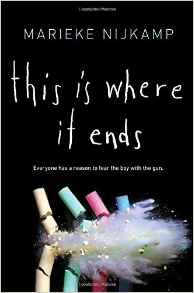 To say this book was intense would be an understatement.  From the get go, you are thrust into this school as tragedy is unfolding.  It was difficult to read at times, as there is much bloodshed.  Each of the four narrators has some connection to the shooter and you are able to get a unique perspective from all of them.  It is tragic, but it is also a story of family and heroism.  As long as these types of things are happening in our world, we need books like these that help us to explain the senselessness and the emotion of these terrible events.


Everyone has a reason to fear the boy with the gun.

10:00 a.m.
The principal of Opportunity, Alabama's high school finishes her speech, welcoming the entire student body to a new semester and encouraging them to excel and achieve.

10:02 a.m.
The students get up to leave the auditorium for their next class.

Told from four perspectives over the span of 54 harrowing minutes, terror reigns as one student's calculated revenge turns into the ultimate game of survival.

Winter '15 Kids Indie Next List
Goodreads YA Best Books of the Month
Buzzfeed 5 YA Books You Should Be Reading This January
Bustle.com 18 of 2016's Most-Anticipated YA Novels
BookRiot 15 Books out in 2016 You Should Mark Down Now
Posted by Joe Godina at 7:16 AM No comments: