This Promise of Change: One Girl's Story in the Fight for School Equality by Jo Ann Allen Boyce and Debbie Levy 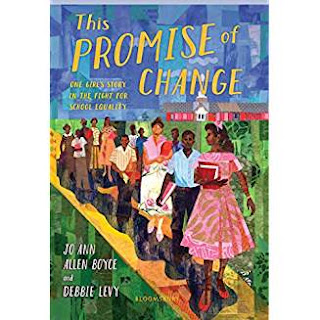 Once again, I was fortunate enough to be able to review a book for ALAN Picks.  The novel that I was given was This Promise of Change: One Girl's Story in the Fight for School Equality.  This was such an important story and one that is often overlooked when talking about the fight for equal education in our country.

Jo Ann Allen was one of just 12 black students who, in August 1956, walked into Clinton High School for the first time and ended segregation in this small Tennessee town.  Two years after Brown v. The Board of Education, the town of Clinton, Tennessee decided to finally follow the Supreme Court’s ruling and end segregation.  While they may not have liked it, it was the law, and the people of Clinton were “good, law abiding citizens.”  Jo Ann Allen and 11 other black students became some of the first students to integrate into a Southern high school.  And as expected, it wasn’t always easy.  Protests, verbal and physical assaults, cross burnings, and other forms of racism followed.  But through it all, Jo Ann held her head high and continued to attend school as it was her moral right to do.

This Promise of Change is a beautiful novel told in verse by Jo Ann Allen herself, along with award winning children’s author Debbie Levy.  It is a story that needed to be told and will give readers insight in to a part of history that is often overlooked when talking about the fight to end segregation.  Jo Ann’s story is not only told in beautiful lyrical verse, but also through the newspaper headlines, articles, interviews, and speeches of those who were directly involved in the fight in this small Tennessee town.  In This Promise of Change, Allen and Levy give voice to the Clinton 12 and the fight for equal education in the United States.

In 1956, one year before federal troops escorted the Little Rock 9 into Central High School, fourteen year old Jo Ann Allen was one of twelve African-American students who broke the color barrier and integrated Clinton High School in Tennessee. At first things went smoothly for the Clinton 12, but then outside agitators interfered, pitting the townspeople against one another. Uneasiness turned into anger, and even the Clinton Twelve themselves wondered if the easier thing to do would be to go back to their old school. Jo Ann--clear-eyed, practical, tolerant, and popular among both black and white students---found herself called on as the spokesperson of the group. But what about just being a regular teen? This is the heartbreaking and relatable story of her four months thrust into the national spotlight and as a trailblazer in history. Based on original research and interviews and featuring backmatter with archival materials and notes from the authors on the co-writing process.

On the Come Up by Angie Thomas 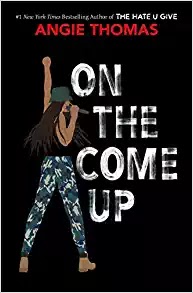 Angie Thomas made a name for herself with her exceptional debut novel, The Hate U Give, and her sophomore novel, On the Come Up, did not disappoint.  Thomas gives us an exceptional character in Bri, a girl who is striving to make it in the rap industry so she can help her struggling family.  But Bri isn't always perfect and makes plenty of mistakes along the way.  She has to try and learn not only from her mistakes, but the mistakes of her family, past and present.  And most importantly, Bri has to decide who she really wants to be.  Is it worth portraying herself in her music as someone she most definitely is not, especially when that means she has a legitimate shot to make her dreams come true?  Or does she stay true to herself even when those dreams may start to slip through her fingers?  On the Come Up is an incredible story about finding your voice and figuring out who you are even when the world seems to be crumbling down around you.


This is the highly anticipated second novel by Angie Thomas, the author of the #1 New York Times bestselling, award-winning The Hate U Give.

Sixteen-year-old Bri wants to be one of the greatest rappers of all time. Or at least win her first battle. As the daughter of an underground hip hop legend who died right before he hit big, Bri’s got massive shoes to fill.

But it’s hard to get your come up when you’re labeled a hoodlum at school, and your fridge at home is empty after your mom loses her job. So Bri pours her anger and frustration into her first song, which goes viral…for all the wrong reasons.

Bri soon finds herself at the center of a controversy, portrayed by the media as more menace than MC. But with an eviction notice staring her family down, Bri doesn’t just want to make it—she has to. Even if it means becoming the very thing the public has made her out to be.

Insightful, unflinching, and full of heart, On the Come Up is an ode to hip hop from one of the most influential literary voices of a generation. It is the story of fighting for your dreams, even as the odds are stacked against you; and about how, especially for young black people, freedom of speech isn’t always free.
Posted by Joe Godina at 8:23 AM No comments:

The Dark Descent of Elizabeth Frankenstein by Kiersten White 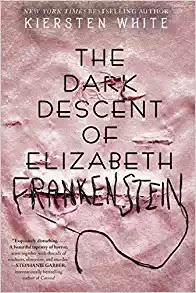 200 years after Mary Shelley's Frankenstein was first published, Kiersten White gives us a retelling of the classic in her novel The Dark Descent of Elizabeth Frankenstein.  This novel was such a wonderful and unique spin on the old tale we have all come to know.

White tells of an orphan girl who has been brought in by the Frankenstein family to help control and normalize young Victor Frankenstein.  And she does just that in many ways, while at the same time covering up the bits of madness that peak out from time to time.  Elizabeth knows that the only way she will have a future is by making sure Victor always needs her.  As Victor gets older and leaves to pursue his studies, Elizabeth worries that her future is slipping away.  She goes to find Victor and secure her place within the family.  But what she finds is a disturbing and deep madness that has taken a strangle hold on Victor.  He has become obsessed with the idea of finding a way for Elizabeth to never leave him, even if that means she must die in order to live forever.

This retelling of the classic story will keep you on the edge of your seats.  It is creepy and thrilling and everything you would want of a Frankenstein story.  If you are a fan of Mary Shelley's famous tale, you will also be a fan of this!

Elizabeth Lavenza hasn't had a proper meal in weeks. Her thin arms are covered with bruises from her "caregiver," and she is on the verge of being thrown into the streets . . . until she is brought to the home of Victor Frankenstein, an unsmiling, solitary boy who has everything--except a friend.

Victor is her escape from misery. Elizabeth does everything she can to make herself indispensable--and it works. She is taken in by the Frankenstein family and rewarded with a warm bed, delicious food, and dresses of the finest silk. Soon she and Victor are inseparable.

But her new life comes at a price. As the years pass, Elizabeth's survival depends on managing Victor's dangerous temper and entertaining his every whim, no matter how depraved. Behind her blue eyes and sweet smile lies the calculating heart of a girl determined to stay alive no matter the cost . . . as the world she knows is consumed by darkness.
Posted by Joe Godina at 11:41 AM No comments: