We Speak in Storms by Natalie Lund 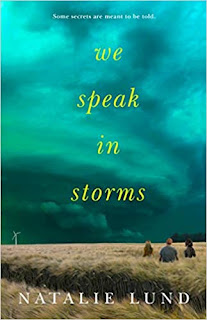 We Speak in Storms by Natalie Lund is a beautifully crafted novel about merging our past with our present in order to create a future.  It is about self-acceptance.  It is about following our dreams.  It is about letting go and moving forward.

We Speak in Storms is told through the perspective of three teens who suddenly find themselves thrown together in the aftermath of a tornado.  More than 50 years to the day that a tornado took the lives of many teens, another storm hits.  Joshua, Brenna, and Callie, three teens who have always found themselves on the outside looking in, suddenly find the spirits of the past are now a part of their lives in the present.  While finding peace in their past, these spirits will help to build a future of hope for the three teens who so desperately need their help.

A powerful and haunting debut novel about friendship, acceptance, and learning to let go as the balance between the living and the dead is upended, perfect for fans of We Were Liars.

It's been more than 50 years since a tornado tore through a drive-in movie theater in tiny Mercer, Illinois, leaving dozens of teens -- a whole generation of Mercerites -- dead in its wake. So when another tornado touches down in the exact same spot on the anniversary of this small-town tragedy, the town is shaken. For Brenna Ortiz, Joshua Calloway, and Callie Keller, the apprehension is more than just a feeling. Though they seem to share nothing more than a struggle to belong, the teens' paths continue to intersect, bringing them together when they least expect it, and perhaps, when they need it most. Both the living and the dead have secrets and unresolved problems, but they may be able to find peace and move forward--if only they work together.

A beautifully told, haunting yet hopeful novel about pushing past the pain, facing the world, and finding yourself.
Posted by Joe Godina at 10:08 AM No comments:

Clap When You Land by Elizabeth Acevedo 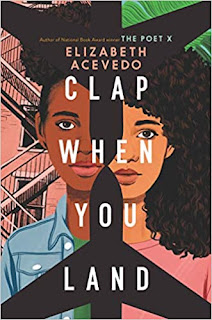 A couple of years ago, Elizabeth Acevedo won ALL the awards for her incredible novel The Poet X.  Clap When You Land is the third book we get from her, and it is another beautiful story.  It won't surprise me one bit to see this one take home a bunch of awards as well.  Like The Poet X this one is also told in verse.  Acevedo's words are beautiful and poignant as she tells the story of two sisters, worlds apart, who never knew the other existed until their father tragically passes away.  This is a story about grief and pain, but also one of forgiveness and understanding.  It is a novel about family and the sometimes unseen bonds that hold them together.

Clap When You Land is the story of Camino and Yahaira, two sisters who don't even know the other exists.  But when their father dies in an airplane crash, they soon discover their common link.  As both mourn the passing of their father, and the things he left with them, they have to face the reality that he may not have been the man they always thought he was.  And when Yahaira comes to the Dominican Republic to bury her dad, she meets her sister for the first time.  While both often want to be angry with each other, they realize that they are not the real target of their own anger and grief.  They are able to see their father reflected in each other and find the bond that ties them together may be much stronger than they ever could have imagined.  Through her beautiful words, Elizabeth Acevedo is able to give the reader a story of two sisters who are able to build a bridge that spans so much more than the ocean that has always separated them.

In a novel-in-verse that brims with grief and love, National Book Award-winning and New York Times bestselling author Elizabeth Acevedo writes about the devastation of loss, the difficulty of forgiveness, and the bittersweet bonds that shape our lives.

Camino Rios lives for the summers when her father visits her in the Dominican Republic. But this time, on the day when his plane is supposed to land, Camino arrives at the airport to see crowds of crying people…

In New York City, Yahaira Rios is called to the principal’s office, where her mother is waiting to tell her that her father, her hero, has died in a plane crash.

Separated by distance—and Papi’s secrets—the two girls are forced to face a new reality in which their father is dead and their lives are forever altered.

And then, when it seems like they’ve lost everything of their father, they learn of each other.
Posted by Joe Godina at 1:18 PM No comments: 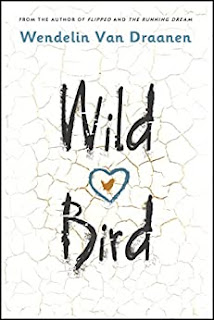 Wild Bird is the second novel I have read from Wendelin Van Drannen (The Running Dream being the first) and both of them have left me in tears.  Happy tears, but tears none the less.  The novel is such an incredible story of self-discovery and even more importantly, self-acceptance.  It is a story about families and friendships and understanding what is real and what isn't.  And finally, Wild Bird is a story of hope for the future.

Wild Bird tells the story of Wren Clemmens, a 14 year old girl who has lost her way.  After moving to a new city, Wren finds it difficult to make new friends until she crosses paths with Meadow.  This new friend leads her down a path that includes drugs and shoplifting among other things.  Wren often lashes out at her family when all they want to do is help her.  Then one night she is yanked out of her bed by people she doesn't know.  She is quickly whisked away and put on a plane to Utah.  She discovers that she has been enrolled in a wilderness therapy camp where she must survive eight weeks in the desert.  And during this time she is forced to discover who she is and who she wants to be.  She has to figure out what family and friendship really mean.  Most importantly, she is faced with finding hope for a future she never really believed she could have.

From the award-winning author of The Running Dream and Flipped comes a remarkable portrait of a girl who has hit rock bottom but begins a climb back to herself at a wilderness survival camp.

3:47 a.m. That’s when they come for Wren Clemmens. She’s hustled out of her house and into a waiting car, then a plane, and then taken on a forced march into the desert. This is what happens to kids who’ve gone so far off the rails, their parents don’t know what to do with them anymore. This is wilderness therapy camp. Eight weeks of survivalist camping in the desert. Eight weeks to turn your life around. Yeah, right.

The Wren who arrives in the Utah desert is angry and bitter, and blaming everyone but herself. But angry can’t put up a tent. And bitter won’t start a fire. Wren’s going to have to admit she needs help if she’s going to survive.
Posted by Joe Godina at 7:54 AM 2 comments:

The Lucky Ones by Liz Lawson 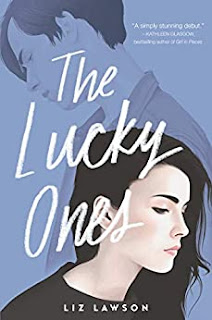 They Lucky Ones is Liz Lawson's debut novel, and if this story is an indicator, we have a lot to look forward to in her writing.  The Lucky Ones is emotionally raw and gritty.  It is a beautiful story about guilt, grief, and finding yourself among the trauma you have endured.  But probably most importantly, this novel is about resilience, hope, and forgiveness.  Lawson captures the pain of survivor's guilt while at the same time moving toward a future of acceptance and fulfillment.  It is both a beautiful and painful debut that will surely stick with you long after you have finished the final words.

The Lucky Ones is told through dual points of view.  First comes May, a survivor of a school shooting which claimed the life of her twin brother.  May was the only one in the band room that day that came out alive.  And almost a year later, she still feels guilt over that day.  Guilt that she didn't do more to save her brother and the others.  Guilt that she had drifted apart from Jordan before he was gone.  And suddenly guilt that maybe it was all her fault.

Zach gives us the other point of view.  Zach did not go to same high school as May and the other victims, but his mother is a lawyer who has taken on the task of defending the shooter.  Because of this, Zach has lost almost all that he has ever known.  His girlfriend has left him.  One of his closest friends has abandoned him.  Others at school treat him as an outcast because his mom has taken on the case.  All he has left is his best friend Conor, who has been by his side throughout.  Conor is all he has until he happens to cross paths with May.  They find an unlikely friendship in each other.  One that isn't always easy, but is most definitely worth it.  Now these two have the opportunity to show each other what self-forgiveness looks like while blazing a path towards a future that is full of hope.

For fans of Thirteen Reasons Why, This Is How It Ends, and All the Bright Places, comes a new novel about life after. How do you put yourself back together when it seems like you've lost it all?

May is a survivor. But she doesn't feel like one. She feels angry. And lost. And alone. Eleven months after the school shooting that killed her twin brother, May still doesn't know why she was the only one to walk out of the band room that day. No one gets what she went through--no one saw and heard what she did. No one can possibly understand how it feels to be her.

Zach lost his old life when his mother decided to defend the shooter. His girlfriend dumped him, his friends bailed, and now he spends his time hanging out with his little sister...and the one faithful friend who stuck around. His best friend is needy and demanding, but he won't let Zach disappear into himself. Which is how Zach ends up at band practice that night. The same night May goes with her best friend to audition for a new band.

Which is how May meets Zach. And how Zach meets May. And how both might figure out that surviving could be an option after all.
Posted by Joe Godina at 9:43 AM No comments: